The Life of Katie….

I enjoyed reading all your comments after posting Friday Trivia on Dogs.  It seems that lots of dogs get into chocolate and they have survived.  Whew.  Thats a good thing.

Apparently chocolate contains theobromine that can cause cardiac irregularity and fatal heart attacks especially if the dog becomes excited.  It also irritates the GI tract and in some dogs can cause internal bleeding, which in some cases kills them a day or so later.  Soooooo we have all been very lucky.  Apparently it depends on the size and health of the dog also and the kind of chocolate. 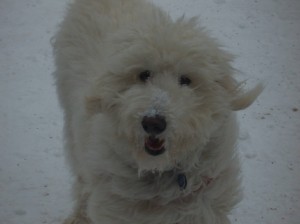 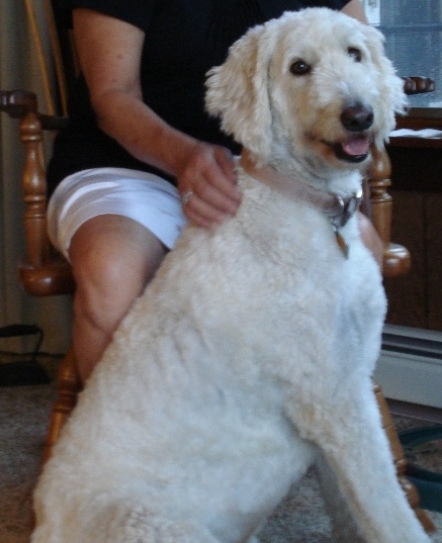 Anyway…I’ve had some comments about Katie the Labradoodle’s picture I posted.   Unfortunately she isn’t mine.  She belongs to friends of ours.   She is a mix between a large poodle and a labrador retriever.  This breed is like an overstuffed animal as Faith  commented.  Her daughter has one also and has posted some pictures.  These dogs have a wonderful disposition.

She was given to Mickey and Molly  when she was about 1 year old.    Most people who know Mickey and Molly say they want to come back as one of “M&M’s” pets.  She sure has it better than most.

Katie gets along with her 3 feline sisters and brothers that can be found anywhere they would like to be….

in the linen closet…. 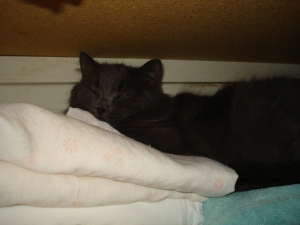 in a comfy basket on the table….

Katie has a beach road of neighbours who love her to bits.  Woody, lives 2 cottages away and enjoys training her.  She’ll let “M&M” know when she sees him through the kitchen window outside his house.  When they let her out she runs right to him.  He loves her as much as she him.  She’ll spend the afternoon with him and when play time is over, he tells her and she runs back home.  Their neighbours call on her and take her for walks.  Its not uncommon for her to have walked with 2 different neighbours and have spent hours playing with Woody in one day….and that is most days.

Around this area, where Marc’s cottage is also,  people like to travel the beach road on golf carts to visit each other.   Katie loves to sit in the back of a golf cart and visit too, her head held high like the Queen of Carts!   Katie has certainly found a wonderful loving home and lifestyle.