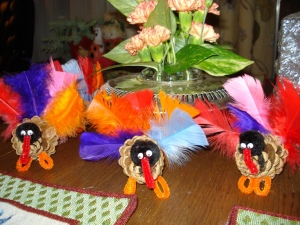 For Thanksgiving this past weekend I had all intensions of making Pinecone Turkey Name Placecard Name holders.  Now I thought of this rather late…on Wednesday evening.  I crawled around under the trees at work on Thursday morning looking for cones that were partially open.  After grocery shopping and picking up this and that I finally settled down to making them later in the evening and that was the only time I could make them.  Now they are easy to make but not all “children” should be using hot glue.

Here is how I made them.  I’ll let you know why I only got to the 4th one and decided I couldn’t make another one this year.  And why I decided to use them as table decoration and give one to each couple as a favour.   YOU might want to glue a  little card with each person’s name on it to sit at their place setting.

Here are the materials needed 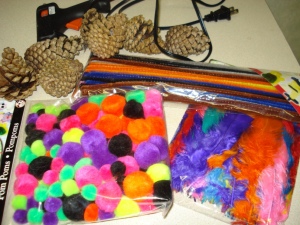 and oh yes these too. 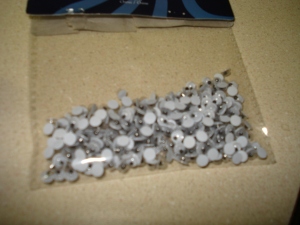 I found all these goodies at the dollar store and had enough left over to make lots of other things.   So what I have pictured above for these little gobblies are a bag of tiny wiggly eyes,  coloured pipecleaners (you only need reds and oranges) and coloured feathers (or natural colours).   You’ll also need a glue gun.

For each turkey I cut 2 – 3″ lengths of orange pipecleaner and folded each one in half and twisted the ends and made the other end flatter and larger for his feet.  (sorry fuzzy) 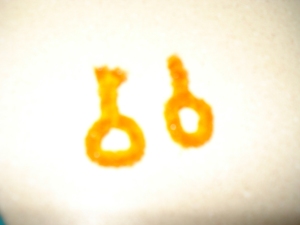 I inserted the twisted ends into the front bottom of the pinecone for feet. 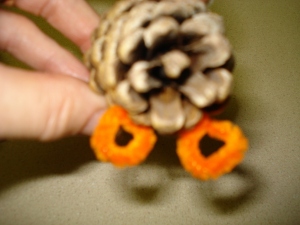 Next I took a little black pompom and glued it in the centre front for his head and glued on 2 wiggly eyes.  Careful hot!!   I took a 3″ piece of red pipecleaner and folded that in half.  I then flattened and folded under the end piece to form his little waddle. 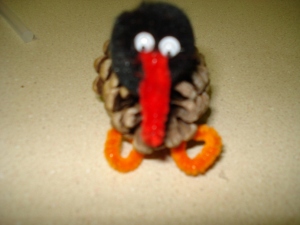 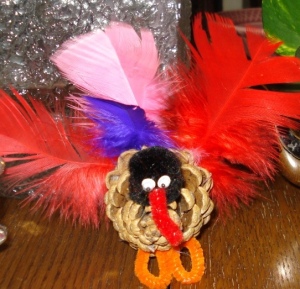 Be very careful.  This is very hot, sticky business and the reason why I stopped at number 4.  See? 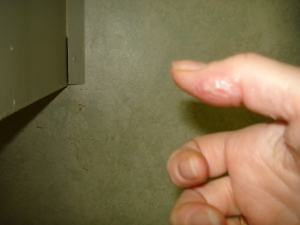 I had hot glued feathers stuck to my forefinger (I’d finally removed them by this picture) and thumb….and oh my that burned..and I lost some skin too.

If you make some for your Thanksgiving…please send me your pics to share.  Have fun…

What WAS funny about the whole thing was that I tried to find pinecones that were somewhat open and crawled around the trees at work looking without much success.  After I’d made all the little turkeys I set them on my diningroom table.  Whe I returned from work I couldn’t believe it – they all looked…dead!!  Belly up.  I wondered WHO had been in and done that….and why were some of the legs at the back now.  *lol*.  During the day those silly little guys had popped open, lost grip with those little orange footsies and with their rounded tummies they had flipped over.  A joke on me I guess.

Filed under Made by Me, Tutorials