Monday again…a Blue Monday arranged by our Hostess with the mostess Sally from Smilingsally.   Be sure to click to Sally’s site to see all the other participants who are sharing BLUE with you today.  They’ll love a comment from you.  It lets them know you’ve been there….and thats fun.

BLUE Monday and for me it was also a touch of a BLUE Sunday along with unexpected WHITE colour too!   I blogged on Saturday about driving up north an hour to my mom’s and we were doing our annual Plumfairy Craft Show.   I woke up to some snow and it looked cold and dismal but soon turned nice and bright with beautiful BLUE skies. 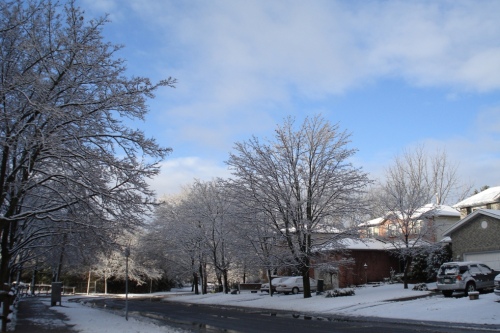 This is my street on my drive out.

The drive started out like such a pretty picture with those continued BLUE skies.  Now between my mom’s town and mine there is an invisible boundary line known as the “snow belt” and the difference on either side can be world’s different.

At that “line” the snow started and 10 minutes later I decided it was getting a little nastier than I would like it to be on that highway.

I got off at the next exit thinking the quieter roads might be better.    They were not. 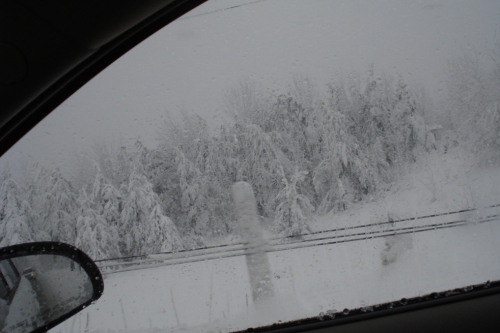 It was getting slippery and it was so white with snow

and white air and I made the decision to head home while I could safely.   I was disappointed as I sulked my way home, my mom’s soup in the container.   At home it was a beautiful day just as I left it on my way out.   The snow storm continued at my mom’s.   Too bad…so sad  :o(     Some of us know this is in store now and I wanted to share with friends enjoying much warmer types of weather.  Lucky you.

Now I had my camera out of the case on the seat from taking the pictures at home.  I wasn’t driving in bad conditions merrily snapping pictures.  They were taken while I was going slow and I take good pictures when I don’t look through the lens *lol* don’t I?  That then is my BLUE Monday story with BLUE skies at the beginning and the end of it.   Enjoy the rest of your BLUE Monday though Sally’s.